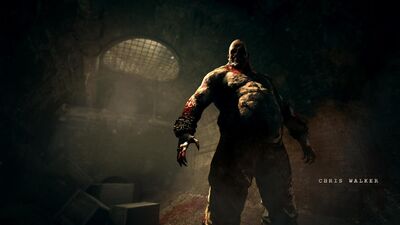 Chris Walker has other uses. Please see Chris Walker (Disambiguation) for other meanings. Chris L. "Strongfat" Walker is one of the primary antagonists of Outlast and a minor antagonist in Outlast: Whistleblower. He is a recurring and very large Variant that pursues Miles Upshur relentlessly...

If Outlast was made into a movie, do you think WWE wrestler Kane would make a good Chris Walker?

When I see Chris, I see Kane for some reason,

Chris Walker was a former a Murkoff employee. Until he himself was put in the project becoming a variant himself.

But when Walrider broke, he also did, he also remembered that the Walrider was not to escape or have a host.

Following his proticalls that he had before being thrown in with the other experiments.

He would find people, inmates, variants, or employees all would meet the same fate of being killed before walrider could use them to escape, and wreck havoc. However he himself was also mentally il before he was thrown in.

So that would explain his speach and his "trophy" room with heads.