"People want us to keep trying to scare them! We’re more than happy to oblige. And we will scare the shit out of them."
―Philippe Morin revealing the DLC.

Outlast: Whistleblower (initially known as Outlast: Story DLC) is a downloadable content for the first person survival-horror video game, Outlast, developed and published by Red Barrels. Despite being an addon, the studio often treats the product as a standalone game.

Whistleblower starts off as a prequel to Outlast, revealing the reasons behind Mount Massive Asylum's outbreak, while simultaneously overlapping with the main story to reveal its conclusion from the previous cliffhanger. It was released for PlayStation 4 and PC on May 6th, 2014, and for Xbox One on June 19th, 2014.

Similar to its predecessor, combat is impossible and the player must either run or hide from their enemies in order to stay alive. The players can hide in various spots in order to avoid their pursuers, such as nearby lockers, below beds, in various corners or simply blending in with the darkness. Closing doors will impede enemies and squeezing through small spaces can lose them. Certain scripted events will require a specific action from the player.

The only item the player has access to is his camcorder, which is automatically acquired after the main character breaks out of his holding cell. The camcorder is battery operated and comes with a night vision function which is used to navigate through dark areas. Batteries can be found in various spots, usually nearby electronic devices, such as radios, Walkie-talkies, etc. While the camcorder is up and filming, the character will write his thoughts in a notebook. Along the game, the player can pick up various documents, scattered throughout the asylum, that provide a background story for some of the characters. The documents appear as blue folders with "CONFIDENTIAL" stamped on the front. Aside from scavenging batteries and finding documents, certain tasks will require for the player to retrieve a key.

Waylon Park is a software engineer working at Mount Massive Asylum for the Murkoff Corporation. After several encounters working directly with the Morphogenic Engine and witnessing the torture that Eddie Gluskin endured, he decides to send an email to Miles Upshur reporting on the corruption of Mount Massive. Shortly after sending it, he is caught by his employer, Jeremy Blaire. As punishment, Blaire has Park committed and forced to endure the tests of the Morphogenic Engine. However, after The Walrider breaks free and begins causing chaos at Mount Massive, Park manages to escape his restraints, taking a camcorder with him. He roams the facility as surviving guards and personnel try to escape from the newly-freed prisoners, trying to find a radio that he can use to contact the authorities. During this time, he consistently eludes a bearded, cannibalistic prisoner named Frank Manera, who wields a mechanical circular saw blade and tries to kill him in many ways, including trapping him in a furnace. Just as Park manages to find a radio, Blaire appears and destroys it, insisting that no one can reveal the secret of Mount Massive. He leaves Park to die at the hands of Chris Walker, only for Park to escape.

Park eventually wanders into a secluded area of the Vocational Block, where a variant by the name of Dennis, inflicted with dissociative identity disorder, captures and offers him as a sacrifice to a prisoner named Eddie Gluskin, whom he calls "The Groom". While initially eluding Gluskin, Park falls into an elevator shaft and gets a piece of debris lodged in his right shin, reducing him to a limp. Park is eventually captured, where he discovers how Gluskin repeatedly tortures and mutilates male prisoners' genitals, treating them like his brides, before brutally killing them. He attempts to kill Park in the same way, but Park manages to escape at the last second with the help of another prisoner who attacks Gluskin. After Gluskin kills the other prisoner and returns to kill Park by hanging him in a gymnasium full of hanging bodies, Park puts up enough resistance so that Gluskin is caught up in the multiple ropes of his pulley system, and eventually impaled by a metal rod.

As daylight finally breaks, Park continues throughout the asylum, discovering that Murkoff's paramilitary forces have already arrived at the scene and are killing every person they see. Park manages to elude them as they are all killed by the Walrider and makes it to the main atrium. There he finds a wounded Blaire, lying against the front door and pleading for help. However, as Park approaches, Blaire stabs him in the stomach with a knife, declaring that no one can know the truth. But before he can deliver the finishing blow, he is attacked and killed by the Walrider. Park staggers out the open front door and past the military vehicles, towards a red Jeep waiting by the security gate. As Park enters the Jeep and starts it up, he notices a dark figure, Miles Upshur's Walrider-sustained broken body, slowly exiting the asylum with a dark mist surrounding it. He manages to escape and slam through the entry gates just as the figure exits the asylum.

In the epilogue scene, a fully-recovered Park has gotten in contact with a leaking organization to submit his secret information on Murkoff to. Park is sitting at a laptop with the video file of all his recorded video from the asylum, ready to be uploaded to the internet. A man associated with the leaking website standing in front of his desk informs him that it will be more than enough evidence to ruin the Murkoff Corporation, but warns Park that doing so will result in Murkoff doing everything it can to punish him in return, including threatening his family. Despite some initial hesitation, Park ultimately decides to take the risk and uploads the video, as the credits roll once he closes the laptop.

A physical collection featuring all three games from the series dubbed Outlast Trinity was made available for purchase on April 25, 2017 for PlayStation 4 and Xbox One players and as a digital bundle for Steam users.[6] The cover features a prominent antagonist from each game: Richard Trager from Outlast, Eddie Gluskin from Whistleblower and Sullivan Knoth from Outlast 2.[3]

On October 26, 2018, in partnership with Limited Run Games, Red Barrels released physical copies of all three games for the Nintendo Switch, Outlast and Whistleblower being coupled as Bundle of Terror. The two copies feature exclusive cover art commissioned by Limited Run.[2]

The original soundtrack of Outlast and Outlast: Whistleblower were composed by Samuel Laflamme and published alongside the game. They can be purchased from Red Barrels' official website. 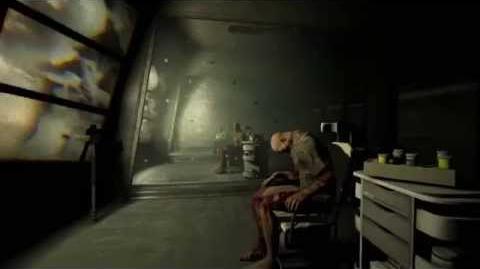 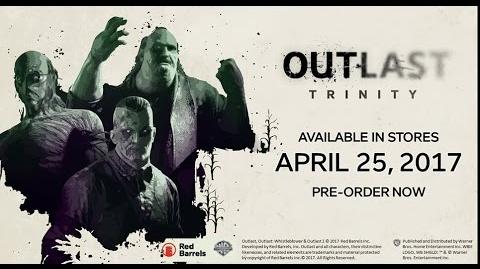 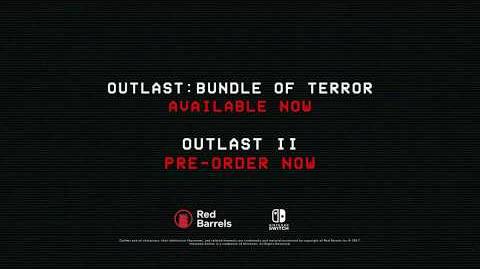 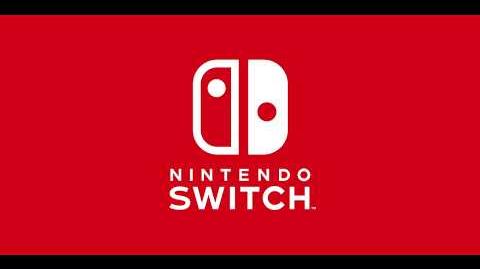 Second promo showing Manera at Recreation Area. In the retail version, Frank never appears during this section of the game

Inside the Water Tower at Drying Ground

An inmate being subjected to the Morphogenic Engine therapy

A group of Variants torturing a Doctor

Audio Mixing with Game On (Note: Andrew is visible in the scene)

The Bundle of Terror promotional image for Outlast and Outlast: Whistleblower